Killers of the Flower Moon : the Osage Murders and the Birth of the FBI / David Grann. 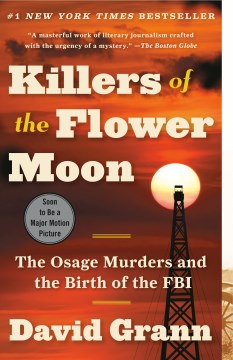 *Starred Review* During the early 1920s, many members of the Osage Indian Nation were murdered, one by one. After being forced from several homelands, the Osage had settled in the late nineteenth century in an unoccupied area of Oklahoma, chosen precisely because it was "rocky, sterile, and utterly unfit for cultivation." No white man would covet this land; Osage people would be happy. Then oil was soon discovered below the Osage territory, speedily attracting prospectors wielding staggering sums and turning many Osage into some of the richest people in the world. Grann (The Devil and Sherlock Holmes, 2010) centers this true-crime mystery on Mollie Burkhart, an Osage woman who lost several family members as the death tally grew, and Tom White, the former Texas Ranger whom J. Edgar Hoover sent to solve the slippery, attention-grabbing case once and for all. A secondary tale of Hoover's single-minded rise to power as the director of what would become the FBI, his reshaping of the bureau's practices, and his goal to gain prestige for federal investigators provides invaluable historical context. Grann employs you-are-there narrative effects to set readers right in the action, and he relays the humanity, evil, and heroism of the people involved. His riveting reckoning of a devastating episode in American history deservedly captivates. Copyright 2017 Booklist Reviews.

In the 1870s, the Osage Indians were herded onto a small tract of land in Oklahoma—land that unexpectedly held vast reserves of oil, rendering the tribe incredibly rich overnight. By law, the Osage had mineral rights outright, although they were still treated like children, requiring a white "guardian" to manage their assets. In 1921, there was a sudden upsurge in deaths of the Osage on the reservation—accidents, bad whiskey, and outright murder. Author Grann (The Lost City of Z) writes of these crimes, where at least 18 Osage and three nontribe members met suspicious deaths by 1925, many of them members of the same family. The Osage pleaded for the federal government to help, and J. Edgar Hoover, head of the fledgling FBI, sent agent Tom White to investigate. White discovered that many of the victims were connected to a single man, an upstanding community leader who stood to profit handsomely from the murders. The long, drawn out investigation finally resulted in convictions and good publicity for the agency, but some unanswered questions remain. A spellbinding book about the largest serial murder investigation you've never heard of, which will be enjoyed by fans of the Old West as well as true crime aficionados. [See Prepub Alert, 10/17/16.]—Deirdre Bray Root, MidPointe Lib. Syst., OH

In the 1920s, members of Oklahoma's Osage Indian nation were the world's richest people per capita, for oil had been discovered beneath their land. Then they began dying mysteriously in what proved to be a test for the newly formed FBI. A story both chilling and shameful; from author of the No. 1 best-selling

New Yorker staff writer Grann (The Lost City of Z) burnishes his reputation as a brilliant storyteller in this gripping true-crime narrative, which revisits a baffling and frightening—and relatively unknown—spree of murders occurring mostly in Oklahoma during the 1920s. From 1921 to 1926, at least two dozen people were murdered by a killer or killers apparently targeting members of the Osage Indian Nation, who at the time were considered "the wealthiest people per capita in the world" thanks to the discovery of oil beneath their lands. The violent campaign of terror is believed to have begun with the 1921 disappearance of two Osage Indians, Charles Whitehorn and Anna Brown, and the discovery of their corpses soon afterwards, followed by many other murders in the next five years. The outcry over the killings led to the involvement in 1925 of an "obscure" branch of the Justice Department, J. Edgar Hoover's Bureau of Investigation, which eventually charged some surprising figures with the murders. Grann demonstrates how the Osage Murders inquiry helped Hoover to make the case for a "national, more professional, scientifically skilled" police force. Grann's own dogged detective work reveals another layer to the case that Hoover's men had never exposed. Agents: Kathy Robbins and David Halpern, Robbins Office. (Apr.) Copyright 2016 Publisher Weekly.

The unquiet grave: the FBI and the struggle for the soul of Indian countryHendricks, Steve

Love and death in the Sunshine State: the story of a crimeWood, Cutter

The ghosts of Eden Park: the bootleg king, the women who pursued him, and the murder that shocked jazz-age AmericaAbbott, Karen, 1973-

The trial of Lizzie Borden: a true storyRobertson, Cara

The girls of Murder City: fame, lust, and the beautiful killers who inspired ChicagoPerry, Douglas, 1968-

The man from the train: the solving of a century-old serial killer mysteryJames, Bill, 1949-

The wilderness of ruin: a tale of madness, Boston's Great Fire, and the hunt for America's youngest serial killerMontillo, Roseanne