How emotions are made : the secret life of the brain / Lisa Feldman Barrett, PhD. 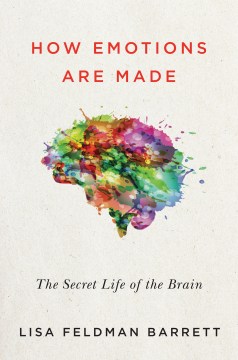 *Starred Review* Prepare to have your brain twisted around as psychology professor Barrett takes it on a tour of itself. A brain learning about the brain via words on a page is clearly a concept Barrett relishes. Her enthusiasm for her topic brightens every amazing fact and theory about where our emotions come from. Hint: it's not what you think. Indeed, each chapter is chockablock with startling insights. The brain's neurotransmitters, plasticity, microwiring, degeneracy, multipurpose circuitry, and more comprise a complex system whose basic function is to balance our "body budget," dispensing and apportioning what is necessary to keep us alive and healthy enough to reproduce. To accomplish this task, the brain must be both architect (of our individual and collective realities) and electrical engineer. And to pull that off, it must be continuously attuned to how we feel. It is "affect"—loosely translated: physical feelings—that rules the mind. With that bit of news, Barrett explodes the myth that we are rational beings. All this is quite a drastic turn from centuries of bad guessing, beginning with the ancient Egyptians, who pulled the brain out through the nose when preparing a body for burial because they believed it was a useless organ. Barrett's figurative selfie of the brain is brilliant. Copyright 2017 Booklist Reviews.

Barrett (psychology, Northeastern Univ.) presents a new neuroscientific explanation of why people are more swayed by feelings than by facts. She offers an unintuitive theory that goes against not only the popular understanding but also that of traditional research: emotions don't arise; rather, we construct them on the fly. Furthermore, emotions are neither universal nor located in specific brain regions; they vary by culture and result from dynamic neuronal networks. These networks run nonstop simulations, making predictions and correcting them based on the environment rather than reacting to it. Tracing her own journey from the classical view of emotions, Barrett progressively builds her case, writing in a conversational tone and using down-to-earth metaphors, relegating the heaviest neuroscience to an appendix to keep the book accessible. Still, it is a lot to take in if one has not been exposed to these ideas before. The theories of emotion and the human brain set forth here are revolutionary and have important implications. For readers interested in psychology and neuroscience as well as those involved in education and policy.

Psychologist and neuroscientist Barrett painstakingly attempts to refute traditional thinking about human emotions as portrayed in the popular media, such as the TV show Lie To Me and Oscar-winning movie Inside Out. She argues that emotions aren't a "fixed component of our biological nature," but rather are constructed in our minds based on predictions. Emotions take form from how they are perceived, Barrett writes, and moreover, they take different forms in different cultures. Her ideas make intuitive sense and are convincing, though her presentation is often slow going as she painstakingly dissects every conceivable counterargument. Some of her ideas are, as she admits, speculative, though "informed by data." The book includes possible implications of constructed emotions, Barrett's prescriptions for emotional health—"eating healthfully, exercising, and getting enough sleep," among others—and an investigation into whether animals experience emotions. Most startling is Barrett's suggestion that chronic pain, stress, anxiety, and autism might be caused by errors in predicted, constructed emotions. The book is a challenging read and will offer the most rewards to researchers already familiar with the longstanding and apparently still unresolved arguments about what emotions are. Agent: Max Brockman, Brockman Inc. (Mar.) Copyright 2016 Publisher Weekly.

Subliminal: how your unconscious mind rules your behaviorMlodinow, Leonard, 1954-

Incognito: the secret lives of the brainEagleman, David

Phantoms in the brain: probing the mysteries of the human mindRamachandran, V. S.

Understanding the brain: from cells to behavior to cognitionDowling, John E.

Welcome to your brain: why you lose your car keys but never forget how to drive and other puzzles of everyday lifeAamodt, Sandra

Consciousness and the Social BrainGraziano, Michael S. A., 1967-